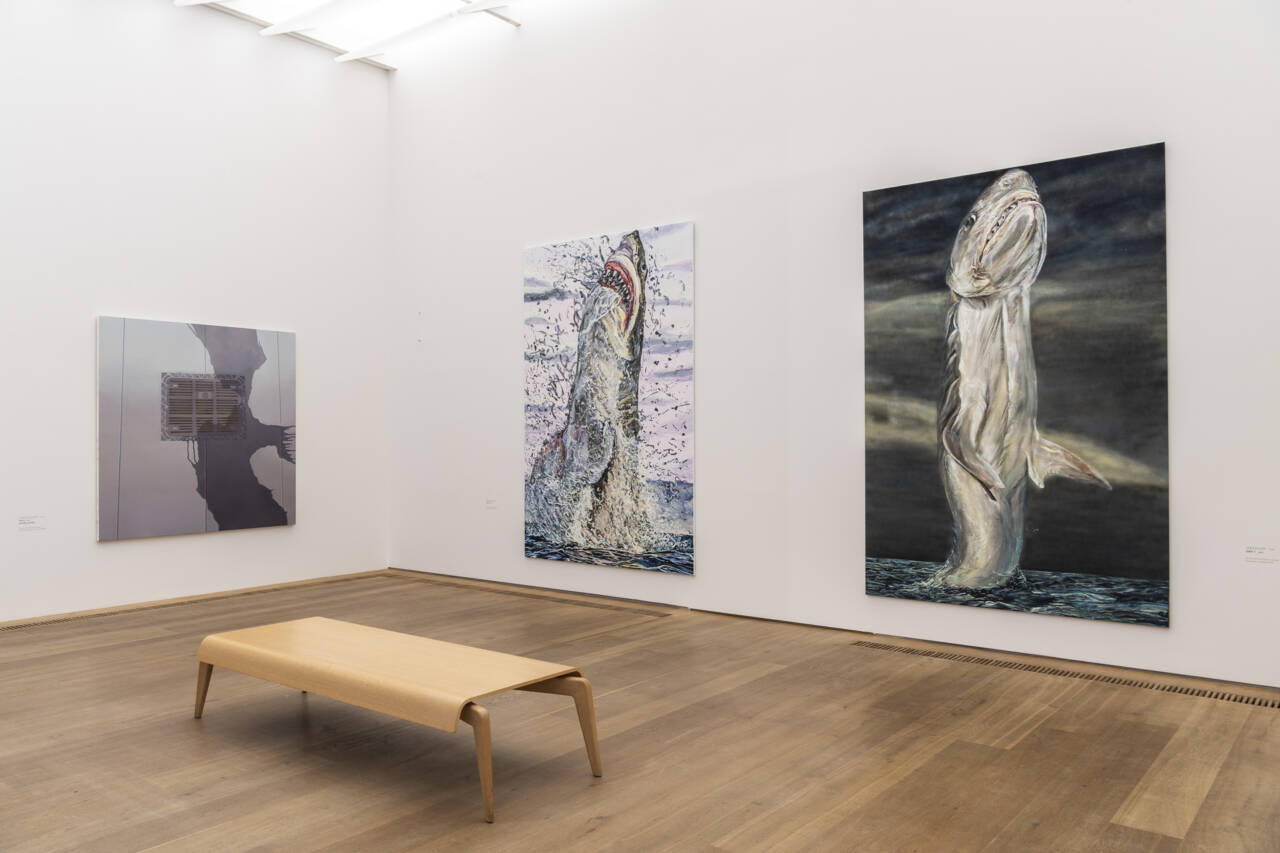 From 17 January to 19 April 2020, works by Jana Euler and Thomas Eggerer will be shown in Gallery 0.8 of the Museum Brandhorst. Both deal in very different ways with painterly forms of expression and associated tropes of male dominance.

Large painterly gestures and appearances are often deemed to be male. Characteristics, format, the application of paint, but also motifs, even whole painting styles – just think of Abstract Expressionism, for instance – are linked to an idea of masculinity. This resulted in a self-concept of painting that was fed equally by both painters and viewers. In their works, Jana Euler and Thomas Eggerer allude in very different ways to such painterly forms of expression of male dominance.

Euler’s “GWF” series (2019), in which the artist portrays large-format sharks, serves these painting clichés, while at the same time torpedoing them. The phallically erupting bodies no longer appear threatening, but rather frightened. Instead of sovereignty and power, the fear-inducing subject itself exudes insecurity and weakness. The painterly variations that Euler goes through in the process become part of the argument. The “Great White Fear”, the white man’s fear of the unknown other, pushes its way to the forefront. The sharks, with their anthropomorphised faces, become a humoristic reflection of various neuroses – an expression that can be transferred to a paradigm shift affecting the whole of society.

With his work “Waterworld” (2015), Eggerer appears to present the maximum contrast to the aggression inherent in Euler’s works. His bathers wade and paddle quietly through the water, recalling scenes of bourgeois strolls from the history of modern painting. However, his figures look almost identical, and all spatial perspective is removed by the water, which occupies the entire area of the picture. In this way he breaks the impression of a social structure: what remains is the isolated parallel existence of exclusively white male figures. Their supposed individuality is countered by a uniformity which – not without irony – can be applied to many social structures.