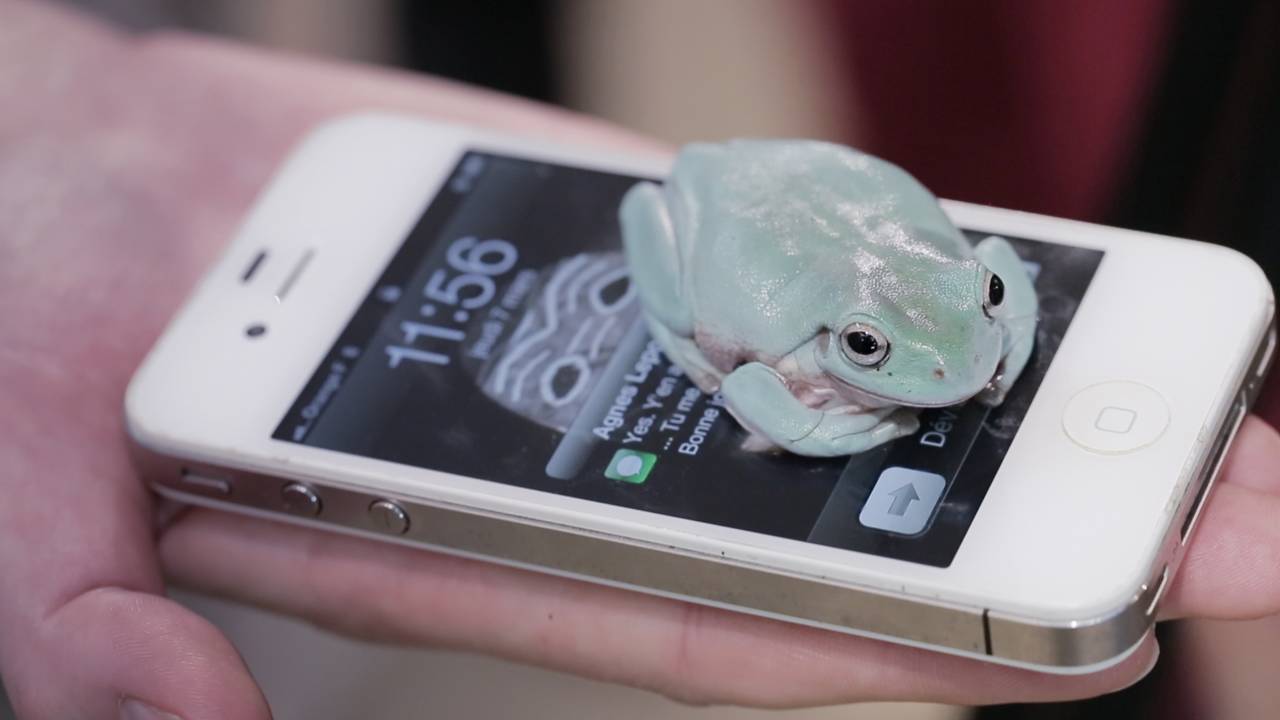 As part of the exhibition 'Creating Realities: Encounters between Art and Cinema', Museum Brandhorst is presenting video works by Camille Henrot (b. 1978 in Paris) in the museum’s Media Rooms.

As part of the exhibition ‘Creating Realities: Encounters between Art and Cinema’, Museum Brandhorst is presenting video works by Camille Henrot (b. 1978 in Paris) in the museum’s Media Rooms.

In ‘Grosse Fatigue’ (2013), Camille Henrot recounts her own version of the history of the universe. At the beginning of the video a computer desktop is to be seen; the background image shows a photo of a galaxy. The file ‘Grosse Fatigue’ on the desktop is opened, and a swift, rhythmical account of the beginnings of the world unravels, written by Henrot together with the American poet Jacob Bromberg: ‘In the beginning there was no earth, no water – nothing. There was a single hill called Nunne Chaha. In the beginning everything was dead. In the beginning there was nothing; nothing at all. No light, no life, no movement, no breath. In the beginning there was an immense unit of energy. In the beginning there was nothing but shadow and only darkness and water and the great god Bumba. In the beginning were quantum fluctuations.’ For the text Henrot and Bromberg combined myths about the origin of the world from a variety of cultures – from the Sioux and Navajo Native American peoples to Shinto Buddhism and Islamic and Jewish creation myths – engaging them in a type of ‘schizophrenic discourse’ (Henrot).
New windows open on the computer screen in quick succession. Archival material about the creation of the universe, the evolution of humankind, and anthropological and biological artifacts can be seen, as well as illustrations created by the artist herself to accompany the narrative. Next to these, recordings are shown which Henrot shot as part of a scholarship program at the Smithsonian Institution in Washington. The world’s largest museum and research complex was founded in 1846 for the increase and distribution of knowledge. Through Henrot’s presentation of the computer desktop as the central vehicle to access information, she shows how the generation and transfer of knowledge has changed fundamentally over the course of the past fifty years. Whereas, earlier, information was available primarily in archives, museums, and libraries, today, every sphere of knowledge is seemingly just a mouse-click away. In ‘Grosse Fatigue’, Camille Henrot refers to canonical instances – and as a consequence to different models related to the generation of knowledge: the mythological-religious, scientific and technical languages and narratives are mixed into a vast primordial history of the world with the aid of a medium from the 21st century.

By foregrounding the computer desktop screen, the central vehicle of digital-image reception and production, ‘Grosse Fatigue’ plays a key role in current video production. This encyclopaedic project won the Silver Lion at the 2013 Venice Biennale.

‘Million Dollar Point’ is the name of a divers’ paradise in the southeast of the island Espiritu Santo, which forms part of the island state Vanuatu in the South Pacific. The island was used as a US military base in World War II. At the end of the war, the inhabitants of the island wanted to buy the equipment used by the American services for a million dollars – hence the title. However, this was refused by the English and French colonial powers, which had jointly administered the region since 1906 as the New Hebrides, for fear of an armed uprising. Instead, the trucks, guns, tanks, and other war material were sunk off the coast. This enormous underwater cemetery is one of the main attractions for divers today. In her video ‘Million Dollar Point’ (2011), Camille Henrot juxtaposes pictures of this undersea world with a music video clip that she filmed from a television screen. It shows a Frenchman singing and dancing on the beach, surrounded by a group of Polynesian women. At first glance, these images of the dancers’ flawless beauty and the clichéd picture of the exotic setting are in stark contrast to the underwater footage relating the military past. At the same time, the images in the music video are a kind of re-staging of the colonial power relationship between the European conquerors and the local inhabitants. Both historical facts seem to be suppressed to an equal extent – reflected not least of all in the dancers’ movements: the women conceal their faces as if refusing to acknowledge the course of history and, with their hands, imitate the coming in and going out of the waves, which hide the seabed from their eyes.